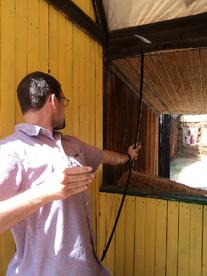 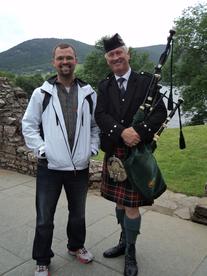 Jared Oliver Adams lives in Knoxville, Tennessee, where he writes, explores, and dabbles in things better left alone. He holds two degrees in music performance, a third degree in elementary education, and is utterly incapable of passing a doorway without checking to see if it leads to Narnia.

I grew up on a cattle ranch in Florida, where I explored the hammocks, had a short stint as a cowboy,  and made dangerous traps with rusty barb-wire.  I vividly remember traipsing through the forests and pastures with my brothers and sister, going out to the groves to pick oranges with my dad, and watching thunderstorms from the front porch with my mom.

When I wasn't outside or at school, I was usually reading, drawing, or playing music. I read lots of Robert Heinlein, C.S. Lewis, Robert Jordan, and Terry Goodkind. For a long time I wanted to be a comic book artist, so when I drew that's the kind of thing I did.  My biggest passion at that time was playing the trombone and euphonium, which I did throughout middle and high school. I had phenomenal band directors, so that was generally the highlight of my day. When it was time to choose a college, I decided to do music.

I got my Bachelor's degree from Florida State University (Seminoles!) in music performance, and then a Masters in the same at University of Minnesota (Golden Gophers!). During these degrees, I started writing fiction. I did this contest called National Novel Writing Month, and it was so much fun I found I couldn't stop. I wrote incessantly. Most of it was awful, but that's how all skills start out. I haven't stopped writing since.

After my Masters in Music was complete, I was faced with the problem of finding a job. It was then that I remembered how fulfilling some of my volunteering in elementary schools had been. After a couple years at Arizona State University (Sun Devils!), I received a second Master's in Elementary Education.

So that's my life in four paragraphs. I currently live in Knoxville, Tennessee with my wife and three children, of whom I am severely to excessively fond. I am also a Christian, of the "Faith alone" in "Christ alone" by "Grace alone" persuasion.